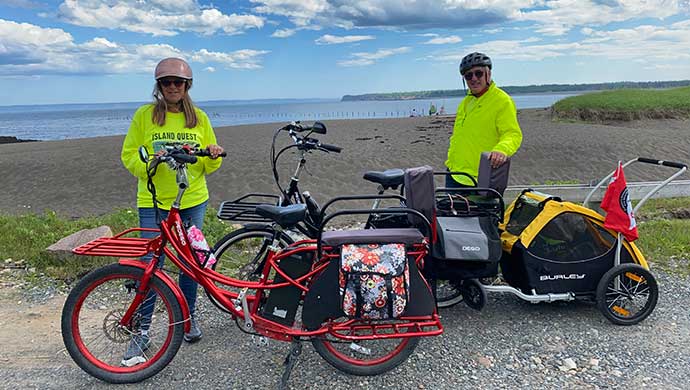 Open since 1979, Jim Gilbert’s Wheels & Deals car dealership has been winning excellence and ethics awards in Fredericton, New Brunswick for decades and in 2019, Jim Gilbert and his wife Dawna started selling Pedego electric bikes too.

The secret to their success known Canada wide is a lot of hard work and abundant hugs – something Jim missed during the pandemic, a time where people were asked to forgo friendly greetings to slow the spread of Covid-19.

“We learned how to do the virtual hugs, air hugs,” he said. “It was challenging because we didn’t know what we were allowed to do. One day was one rule and one day was another. It was tough to stay motivated that way. We were in such a state of flux. It was a difficult time.”

Of course, the “hug” isn’t simply something Jim stands waiting to give, arms outstretched, at the doors of his dealership. Figurative hugs are easier to give during a pandemic, for sure. Huggable means different things to different people but “99.9 per cent of the time, people find it a good thing,” says Gilbert.

Jim first embraced the huggable motto in 2005, during early days as a used car salesperson. Experts were recommending attack-style advertising that pegged one dealer against the other. This was not his style. Instead, he chose to focus on what his dealership did well, look after the customer.

“In our ads, I wanted to talk about what we do for people. We go out of our way to look after people – customers, staff and suppliers. Caring is what makes us huggable,” he said. “Six months into it, my wife, Dawna said we just can’t say we’re huggable, we have to be huggable… We built our huggable brand. Some people build a wall. We built a foundation one brick at a time into a cathedral.”

While Jim and his team dialed back the hugs during pandemic, they used this time to focus on all the ways to make someone feel appreciated.

Jim, Dawna and a whole bunch of their grandchildren came down with Covid-19 during December 2021. Their family was thankful they did not suffer severely.

“We all got it at the same time. There was 16 of us,” Jim said. “It didn’t scare me or set me back or make me nervous. I was actually relieved when we got it and even more relieved when we recovered.”

Jim is also excited for the future of Pedego electric bike sales.

Check out Pedego’s impressive line up…

“In every bad thing, there can be some good. Coming out of the pandemic, Pedego is going to be even stronger and even more in demand. The pandemic put a spotlight on electric bikes – interest went way, way up. People resisted being locked up at the start of the pandemic. They wanted to get outside, and biking became a way to do that. It gave people freedom. I think the pandemic also shone a light on getting healthier and getting outside. And what better thing to do outside than go biking.”