Pedego was born in California in 2008, and Pedego Canada started two years later. Now we have a chain of stores across Canada offering sales, service and rentals of North America’s favourite electric bicycle. 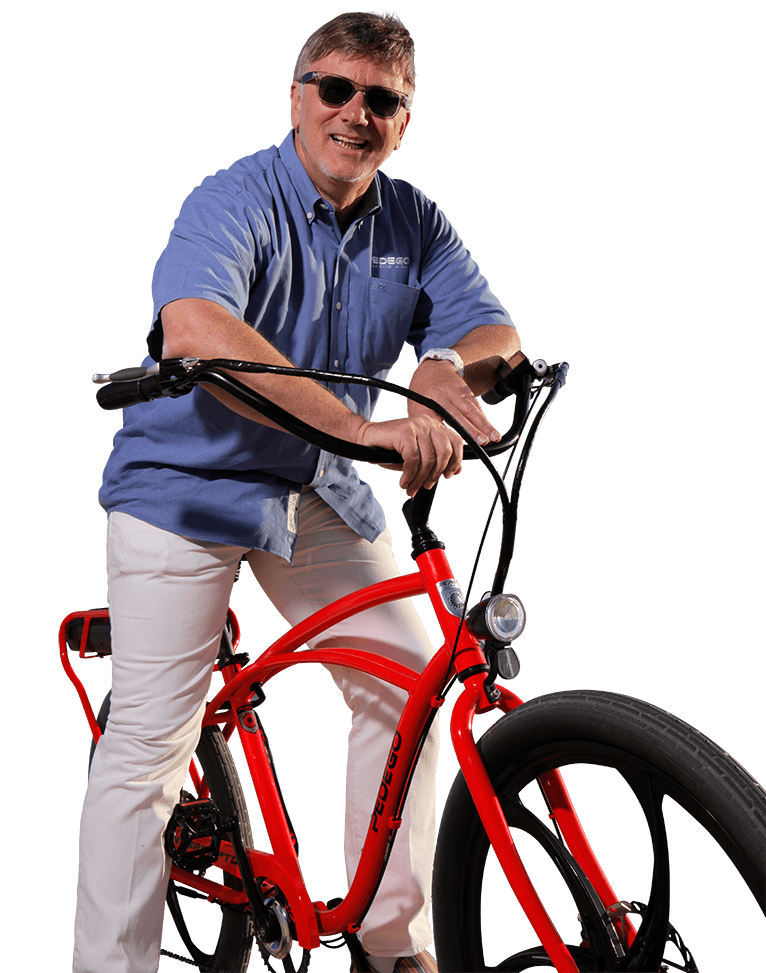 “Making great electric bikes is just the beginning. To be truly great, a company has to stand for something… Pedego stands for you.”

Pedego is the number one brand of electric bikes in America because we put people first. The most important part of every Pedego isn’t some high-tech gadget or fancy bicycle component – it’s the person riding it.“hello, fun…”Our motto is “hello, fun…” because everyone loves to have fun. It’s a universal language. Pedegos are the greatest electric bikes on earth because they’re the most fun to ride.

If a Pedego owner is merely satisfied then we’ve let them down. Satisfied isn’t good enough. We go the extra mile to make sure that every single Pedego owner is delighted. Pedego owners don’t like their bikes – they love them.

We love this business because all we sell is fun! Every hour of every day somewhere on earth someone is falling in love with a Pedego and rediscovering the simple joy of riding a bicycle. That feels pretty good.

Pedego was founded in 2008 by Don DiCostanzo and Terry Sherry, two long-time business partners and lifelong friends who were best men in each others weddings. Don lived on top of a giant hill that took all the fun out of riding to the beach, so he went online and bought an electric bike. He loved it so much that he bought another, and another, and another… Before long, he wound up with seven different electric bikes in his garage! His friends loved them too, and some of them wanted their own, so he opened up a shop in Newport Beach that quickly became the largest electric bicycle retailer in the US.

Soon, Don found himself frustrated and disappointed with the poor quality and boring style of all the electric bikes on the market. He dreamt of creating his own brand of electric bikes that would live up to his high standards and appeal to more people. But he knew he couldn’t do it alone, and that’s where Terry comes in. Terry has warm childhood memories of fixing up old bikes with his dad. He remembers going to swap meets to search for broken down, neglected bikes to bring back to life. He learned to strip them down to the bare frame and completely rebuild them from scratch to be as good as new.

Between Don’s innovative vision and Terry’s technical expertise, Pedego Electric Bikes was born.The colourful, fun bikes were instant crowd pleasers, and world-class customer service earned them a special place in the hearts of customers everywhere. Today, Pedego is the number one brand of electric bikes in America (according to Navigant Research), and that’s only the beginning. Every day, we’re adding more stores, more products, and most importantly, more delighted customers!

When we say Pedego Electric Bikes in Canada are the best, it’s really just bragging.

But when our customers say it — it’s proof!

“Canada is the perfect country for electric bicycles.”

So thought Pedego Canada owner Mike Clyde when he launched his business in January 2010. He had moved here from his native New Zealand, gotten married and settled in the beautiful, but hilly, community of Nelson, British Columbia.

“I live at the top of a 150-metre hill,” he says. “For me to pop into town is no big deal but it’s a slog to get back up to my house. If it weren’t for my electric bike, I’d be using my car a lot more often.” Mike’s daughter started riding in a chariot behind a Pedego and now she rides as a passenger on the Stretch cargo bike.

In this Q&A with Mike, we learn what his first experience was with an electric bike, what the best part of his job is, and why he decided to become the sole distributor of Pedego Electric Bikes in Canada.

When was the first time you were on an electric bike?

My first ride on an electric bike was about 15 years ago with my brother, who’s been involved in the industry for as long as I can remember. He had just put together this contraption that was totally amped up and not entirely legal and we went to the local park. The first thing I did was give it full throttle and there was a spray of grass out the back and I did a little wheel stand – I was completely impressed!

Thankfully that was a one-off and the bikes I’ve since ridden have been excellent and safe. But I have to admit at the time I wasn’t completely sold on the idea of electric bikes. I was like, “Yeah, great idea but it’s not for me. I like to pedal.” It wasn’t until years later that I came to understand they’re not meant to replace your current bike journeys – they’re meant to get you out of your car and create a whole lot of new ones!

How do electric bikes fit into your daily experience now?

It’s my primary means of transportation around town. It’s so easy to hop on my electric bike and go to the bank or the grocery store and then use the assisted pedal feature to cruise back up the steep hill to my house. Otherwise, I’d be using my car. The same goes for my daughter who would much rather ride behind me on the bike than sit in her car seat in the van.

Do you ride other bikes?

I own a full suspension mountain bike that I ride on the singletrack trails behind my house at least three times a week. My electric bike will never replace the fun I experience from that activity. Instead, it adds fun in other areas of my life. It’s interesting because most of the naysayers I encounter are cyclists and their biggest misconception is that the electric bike is competing with their current bike journeys, whether its mountain biking or road riding. But the fact is electric bikes create new bike experiences. If they’re going to compete with anything, it’s the couch or your car.

What have your friends said when they’ve tried one of your e-bikes?

I had a good friend who has seen our company grow over the last five years but had never been on one before. A little while ago I loaned one to her for a few weeks and she said, “I can’t believe I haven’t had this in my life before!” Until you actually go for a spin on an electric bicycle it’s hard to understand how many new bike journeys you’re missing out on, whether it’s cruising effortlessly up a hill or against a headwind, or just having fun zooming around a park or your neighbourhood.

What’s the best part of your job?

Most definitely it’s hearing customer feedback. I have so many stories I can share about how electric bikes have changed lives. A guy on the East Coast bought a tandem electric bike so he and his autistic son could ride together and his son loves it! Another elderly customer in Ontario stopped riding bikes into town because the steep hill home was too much for him – then he got an electric bike and he’s back out there having fun and staying fit. Then there was the woman who said, “Electric bikes gave me my freedom back.” I could go on and on but maybe you should interview them?

That’s a good idea for the testimonial page. In the meantime, why did you decide to rep Pedego bikes?

I think there’s a lot of passion behind the company. Both Don and Terry love the bikes, ride the bikes and they built their business from scratch. They’re not some large corporation that got into electric bikes because they think it’s a growth area within the industry. Pedego understands that the reason people ride electric bikes is because they’re fun.

What do you see for the future of the electric bike industry?

It’s a different cycling culture in Canada than, say, Europe or Asia because we view the bike as a toy as opposed to a vehicle. But that’s changing and with developments such as electric cargo bikes, tandems, and tricycles, people are going to realize just how versatile, handy, and above all fun, electric bikes are.