Why Electric Bikes Should Be Allowed on Bike Paths in Orillia, Ontario 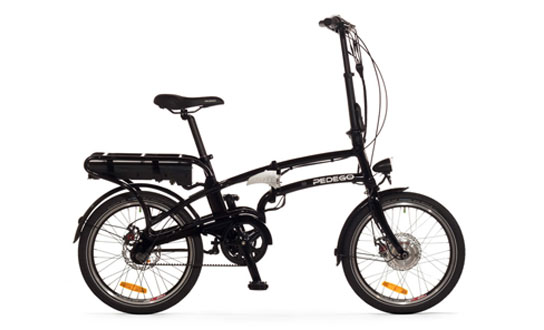 We here at Pedego Canada have been watching with interest the situation playing out in the Ontario city of Orillia, located 135 kilometres north of Toronto. Nicknamed the “Sunshine City,” Orillia is a beautiful community situated between Lakes Couchiching and Simcoe and, because of its incredible waterfront and well-maintained bike trails, it attracts hundreds of thousands of tourists every year. However, there is a conflict unfolding among the city councillors regarding the usage of the bike trails: specifically, they’re debating why electric bikes should be allowed on bike paths in Orillia, Ontario. Councillor Ralph Cipolla is petitioning to ban all electric bicycles from the trails. To quote a recent article by writer Frank Matys: “Ralph Cipolla continues his quest to have (ebikes) turfed from local trails (and) the Ward 2 councillor is turning back the clock for the evidence he says will put the matter to rest. According to Cipolla, contributors to a community-driven fund-raising effort, undertaken for the local trail system in the 1990s, did so believing the paved paths would be reserved for non-motorized uses. ‘The trail is meant for jogging, walking and cycling, and it has changed and it has created problems,’ he added.” 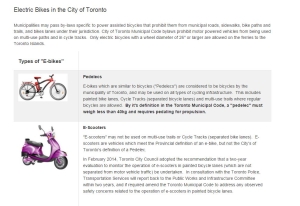 Why Electric Bikes Should Be Allowed on Bike Paths in Orillia, Ontario

Turning back the clock is an appropriate phrase because, while many areas around Canada are moving in the other direction, Cipolla is recommending a step backward. For example, in the city of Toronto all motorized bikes were banned on all paths and bike lanes until recently.  Now Canada’s largest city makes a distinction between scooters and bicycle-style ebikes and allows the latter on all trails as this graph proves: The article by Frank Matys goes on to state that city resident “Al Read frequently travels by bicycle along the city’s waterfront trails and shares Cipolla’s concerns about e-bikes and the potential for harm. ‘They are going too fast,’ Read said. The city should, at the very least, impose a speed limit on local trails, he said. ‘But then it would need to be enforced,’ he added. ‘I would expect motorized wheel chairs would be exempt from any ban.'” While Read and Cipolla are certainly entitled to their opinions, we have come up with four main points why electric bikes should be allowed on bike paths in Orillia, Ontario.

#1. Regular bicycles can travel fast too

One of the arguments made by Cipolla and Read are that ebikes travel too quickly. Let us not forget that regular bicycles can easily travel upwards of 30 km/hr as well, depending on who’s pedalling. Besides, police officers don’t disallow Ferraris from highways because they’re fast. Which brings us to our second point: 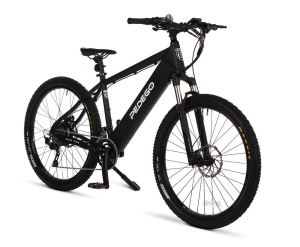 #2. Enacting a speed limit is a better solution

In the quote above, Read says motorized wheel chairs would be exempt from the ban. Interesting that exceptions are already being proposed when the issue is still on the table. Perhaps a better solution is to enact a speed limit on the bike paths and that way no exceptions are necessary. Whatever the form of transportation, be it a tricycle, pedal-assist ebike, wheelchair or pogo stick, all users must abide by one speed limit for all.

Take a look at the photograph above of the Pedego Ridge Rider. What distinguishes it from a regular bicycle? Not much. Regulating traffic on Orillia bike paths is going to be difficult enough without having to be a keen-eyed detective discerning electric bicycles from regular pedal bikes. As battery and motor technology improves, it’s only going to get harder and harder to tell the difference between the two.

#4. Why deny residents and tourists a fun form of transportation?

Electric bicycles (not scooters) enable people who wouldn’t normally exercise to do just that in the outdoors. Having bike paths available also ensures they’re more inclined to get out there and not worry about automobile traffic. Why deny people such a fun experience? Another consideration for city council is a monetary one: why not offer ebikes for rent to the hundreds of thousands of tourists that visit every year? It’ll distinguish your city as an even more fun destination and will provide more income. It’s good to hear that other residents in Orillia are challenging the motions put forward by Cipolla. In the article resident John Menear says critics are ignoring an important distinction between classes of e-bikes and that because he rides a pedal-assisted bike, it’s “no more dangerous than a bicycle.” To read more of Frank Matys’s article entitled “Trails not built for e-bikes: Orillia councillor” log on to Simcoe.com. And if you’d like to learn more about Pedego Electric Bikes, contact us at info@pedegocanada.ca or call 1-888-777-2066 anytime. We look forward to hearing from you!

Support Tax Rebates for Electric Bikes Now
Scroll to top
I'd like to order this Pedego Bike!
Return & Refund Policy