8 myths about electric bikes in Canada
BACK
TO TOP

8 Myths About Electric Bikes in Canada

Electric bikes are becoming more and more popular around Canada and the world, but there still seem to be some underlying myths around what an electric bike does and how one can fit into your life. So in this post we address 8 myths about electric bikes in Canada and we share the truth behind these versatile and fun bicycles, from their history to their current legal status. Enjoy the read, and should you feel that an electric bicycle might be right for you please have a look at our “Which Electric Bicycle is Perfect For You” article.

8 myths about electric bikes in Canada 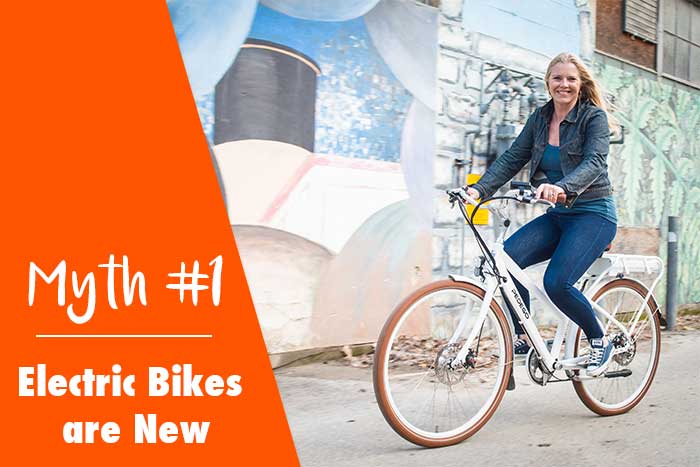 FALSE: The idea of an electric bike has been around for over a century. Benjamin Franklin discovered electricity when he flew his famous kite in 1752 and Baron Karl von Drais created the precursor to the bicycle with his dandy horse, which he unveiled in Munich in 1817. No-one really knows who the first person was to try and combine the two ideas, however, in the 1890s, various US patents were taken out for electric bicycles including one by Ogden Bolton Jr. in 1895. Two years later Hosea W. Libbey of Boston invented an electric bicycle that was propelled by a double electric motor contained within the hub of the crankset axle. This model was later re-invented and imitated in the late 1990s. What is new about electric bicycles are the batteries, which are more powerful and longer lasting than ever before. 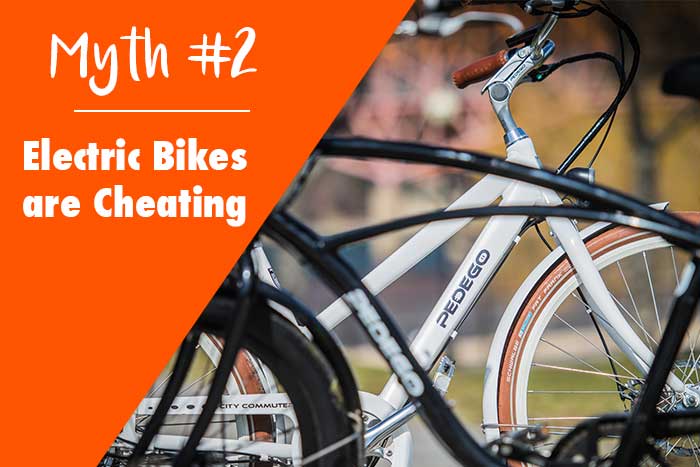 FALSE: Here’s a scenario for you – a middle-aged man is driving his V6 truck up a hill and passes a grandmother on an electric bike. Who’s the cheater? In our opinion it’s the guy burning excessive fossil fuels. A lot of people who ride regular bicycles might say that riding an electric bike is “cheating” but would that grandmother have been on that hill if it wasn’t for an electric bike? We at Pedego Electric Bikes Canada embrace the idea of cheating on an electric bike if it means someone who might not otherwise be on a bicycle is outside and enjoying themselves. 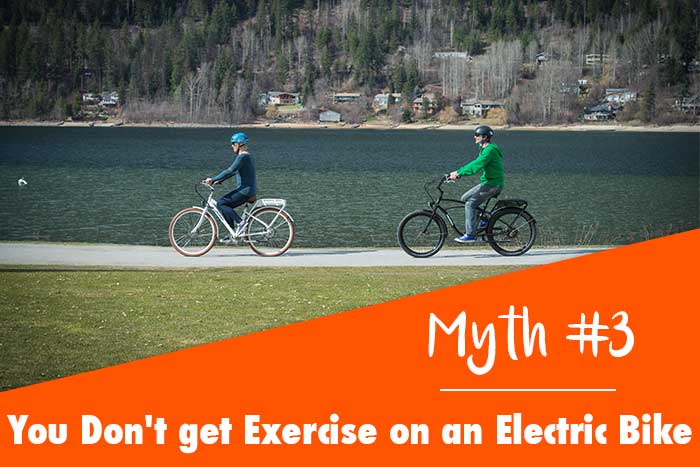 FALSE: An electric bicycle is not a scooter or a motorcycle – by definition it’s a bicycle and has foot pedals attached to a gear system. Granted, the Pedego Electric Bikes have pedal assist and a throttle that aids your pedalling and boosts your power up hills and in headwinds but the fact is you still have to move your feet. That said, you can choose the amount of assistance provided by the bike or you can push as hard as you want! Yes, compared to a regular bicycle you might not get as much exercise but there are people who may not ride bikes at all if it weren’t for the assistance provided by an electric bike. Plus, e-bikes are a lot of fun and so users are encouraged to ride more often!

FALSE: As mentioned in Myth #1, batteries have come a long way since the 1890s and it’s not unheard of for users to ride their Pedego electric bike over 100 kilometres on a single charge. Like your car, though, you’re going to experience better efficiency on long, straight roads without any stops versus a hilly city with many traffic lights. Other factors to consider are headwinds and the weight of the rider or the cargo they’re carrying. That said, different motors do last longer than others and so it’s important to find a trusted brand like Pedego Electric Bikes Canada that stand behind the quality of their products. 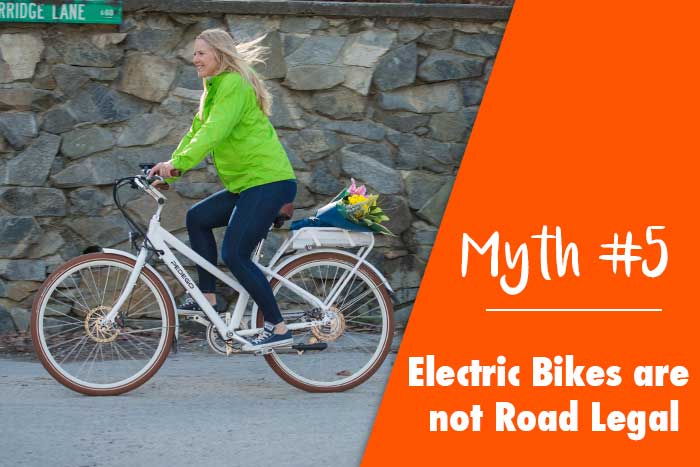 FALSE: All Pedego Electric Bikes conform to the Transport Canada definition for ‘power-assisted bicycles’ (ie: they are not viewed by the law as scooters or electric motorcycles). You can usually go wherever a normal bicycle can go but, in most of Canada, you have to be 16 years old and wear a helmet if you want to ride an electric bicycle on the road. 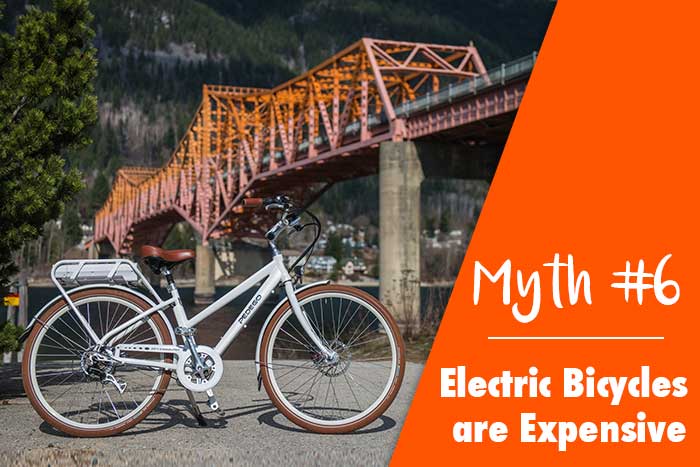 FALSE: Compared to a top-quality mountain bike or road bike, an electric bike is similarly priced. Granted, they’re not as cheap as regular bicycles but if time’s money, than an ebike is going to save you loads. Plus, if you start using a Pedego Electric bike in lieu of a car journey, you’re going to save big! As proof of this, check out our “Cost Savings: A Car versus Electric Bike” article. 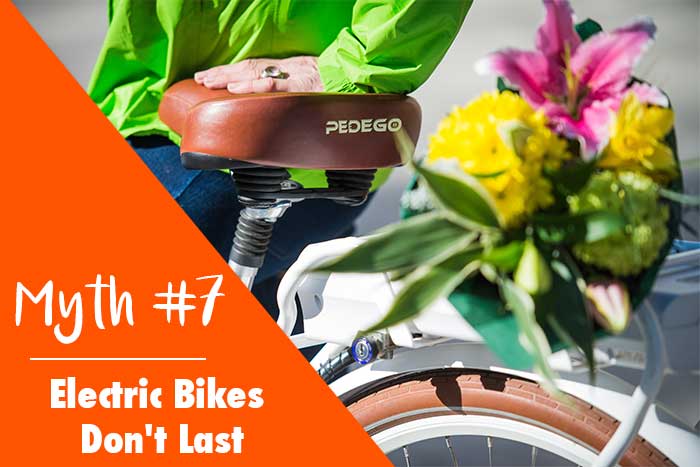 FALSE: If you buy a good quality e-bike, then it will last for many years. Like anything, you get what you pay for. If you buy a good-quality, established brand, like Pedego, it will be just as reliable as a high-end bicycle. However, durability depends on how you treat your bike. If you run it into the ground and never maintain the different parts, it will break down sooner. However, if you look after it properly, do regular maintenance and keep your electric bike clean, it will last a very long time. (And the simple truth is that e-bikes require much less maintenance than a car.) As for the longevity of batteries, Pedego offers a three-year warranty on all theirs and as long as you’re dealing with good battery brands, such as Samsung, Panasonic and Sony, you’ll get two to five years out of one depending on how you use and look after it. (For more about batteries, read our “3 Ways to Extend the Life of Your Battery” article. 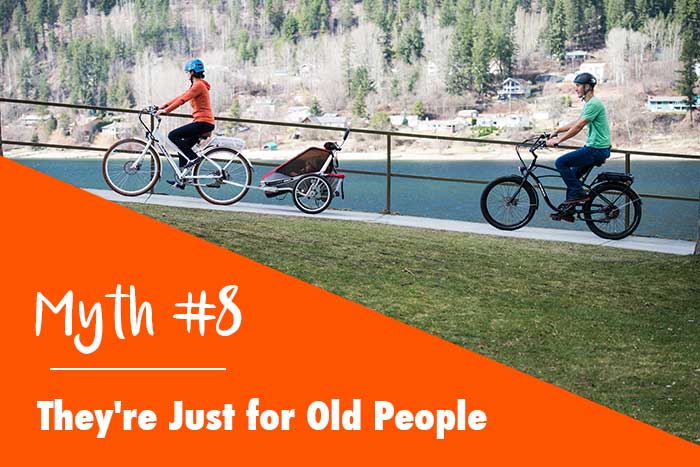 FALSE: Middle-aged men and women love using the Pedego Ridge Rider to explore off-road trails. Young families love transporting their children, groceries and other items on the Pedego Stretch cargo bike. And riders of all ages commute, explore and ride the Pedego Interceptor, City Commuter and Comfort Cruiser. In short, there’s no age restriction for having fun.