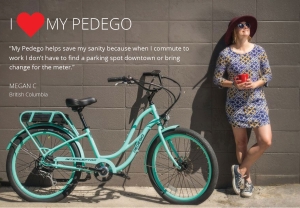 One of our favourite things at Pedego Canada is hearing all the inspirational stories and happy quotes sent to us by riders of Pedego electric bikes. [Do you have a story or quote to share, click here to add it to the form below.]

There are those who have experienced surprising health benefits from getting on an ebike such as Liis Windischmann who was diagnosed with Hashimoto’s disease and Gluten Ataxia. She said she felt like “a dog tethered to a very short leash” until the day she hopped on a friend’s Pedego electric bike. “I was in shock. And awe. And I burst out crying from happiness. In a few moments, I felt a multitude of possibilities open up,” she said. We wrote an entire story about her experience, which you can read here: “Pedego Electric Bike Transforms Life.” 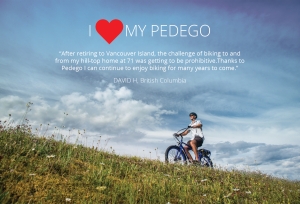 Pedego electric bikes have also been instrumental in helping Canadians deal with knee pain, lung conditions and obesity and you can read all about them in this article, “Surprising Health Benefits of Electric Biking.”

Then there are the riders who rave that Pedego electric bikes transformed their commute experience in cities and hilly towns and those who love riding their Pedego because, well, they’re fun!

Pedego owners love their Pedego electric bikes, which is partly why we created the Canadian Pedego Owners Group to solidify that sense of belonging to a unique community of like-minded people. (And to share a free Welcome Pack full of Pedego goodies.)

It’s also the reason we’ve collected a number of quotes and experiences from Pedego owners so we can share them with the world in our “I ❤ My Pedego” campaign. For example, there’s Marley in British Columbia who says her and her husband purchased a Pedego electric bike instead of a second vehicle and now they’re considering getting a second Pedego! 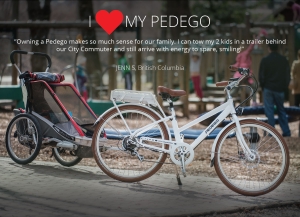 There’s Sam who says the Pedego Stretch is the perfect family vehicle and Jenn who uses the Pedego City Commuter to tow her two children around her hilly town.

There have been so many inspiring stories and testimonies and we’d like to collect more. If you own a Pedego electric bike and have discovered it has transformed an aspect of your life, or it’s simply a fun way to travel, please fill out the form below and we’ll feature your quote in our nation-wide campaign. We’ll make sure to keep it anonymous by only listing your first name and initial but if you want to share with us a photo of you and your Pedego that would be even better!

If you have any questions or want to email a photo to us or talk to us in person, send us an email to info@pedegocanada.ca or call anytime at 1-888-777-2066.

READ ARTICLE
The World’s Longest Bike Path is in Canada

What Does That Noise Mean? Bike Speak 101
Scroll to top
I'd like to order this Pedego Bike!
Return & Refund Policy