Meet Allen Hussey, born and raised in Lindsay, Ontario, and the proud new owner of Pedego Kawartha Lakes. Allen is a father, grandfather, businessman, boyfriend and bicycle rider who became an electric bike convert after facing a health scare. He’s built a family business in downtown Bobcaygeon that will bring smiles onto faces as his customers tour around cottage country on a Pedego Electric Bike.

Four years ago I was diagnosed with cardiopulmonary disease. I’ve always bicycled but suddenly I was worried about going places and not getting home. I wanted to keep biking for my health. I started searching electric bikes, I’m a real Google guy, and I came across Pedego. I loved what I saw so I visited some bicycle dealers who had one Pedego at the back of the store. They were selling other electric and traditional bikes and didn’t have much enthusiasm for the brand. Of course, they could order any Pedego that I wanted, but I thought if I am going to spend that kind of money on a bike, I want to sit on it and feel it. I got in touch with Mike and he told me the only Pedego stores were near Vancouver. Luckily that’s changed: Kawartha Lakes is the third store to open in Ontario this spring!

It is not the first time you’ve built something from scratch, is it?

I was a pioneer in the recycling business, starting one of the first blue recycling box programs in Ontario. After retiring I built a house and this led me into shingle recycling: do you know they’re used as a component in carpark asphalt and road base? I started another waste and recycling company in 2012, which my son Kyle bought from me last year. I love the excitement of creating new projects, it allows me to get creative. My daughter Nicole manages a hair salon. Once I get this Pedego store rocking, there will be the opportunity for all my family to get involved. My girlfriend Tusia has been very supportive as well. I can see this becoming a fun family business.

Do you think electric bikes have synergies with recycling waste?

Absolutely, and not just because they’re environmentally friendly. In both sectors, we’re selling a new idea. People have been riding bicycles forever and electric assistance is new. There seems to be a lot of confusion about what is an ebike compared to a scooter. We’d like to get that mindset switched around that a Pedego Electric Bike is not a scooter; it is a bicycle that allows you to ride further and more often. Hello, fun!

What is the area of Kawartha Lakes like for biking?

It is cottage country, which swells in size during the summer and the best way to get around is by electric bike. We have nice bike lanes following the lakes, small streets that are easy to ride around, and not 10 minutes from our store is a rail trail that goes to Fenelon Falls and north up through Haliburton County.

There are many times when a strong head wind and steep hill make it difficult to handle – not so on a Pedego! We’re surrounded by beautiful lakes, canals and small towns. Do you know you can get from Florida to Bobcaygeon by boat? When we visited Pedego Dunedin this winter we met many Floridians that come to Kawartha Lakes for the summer. 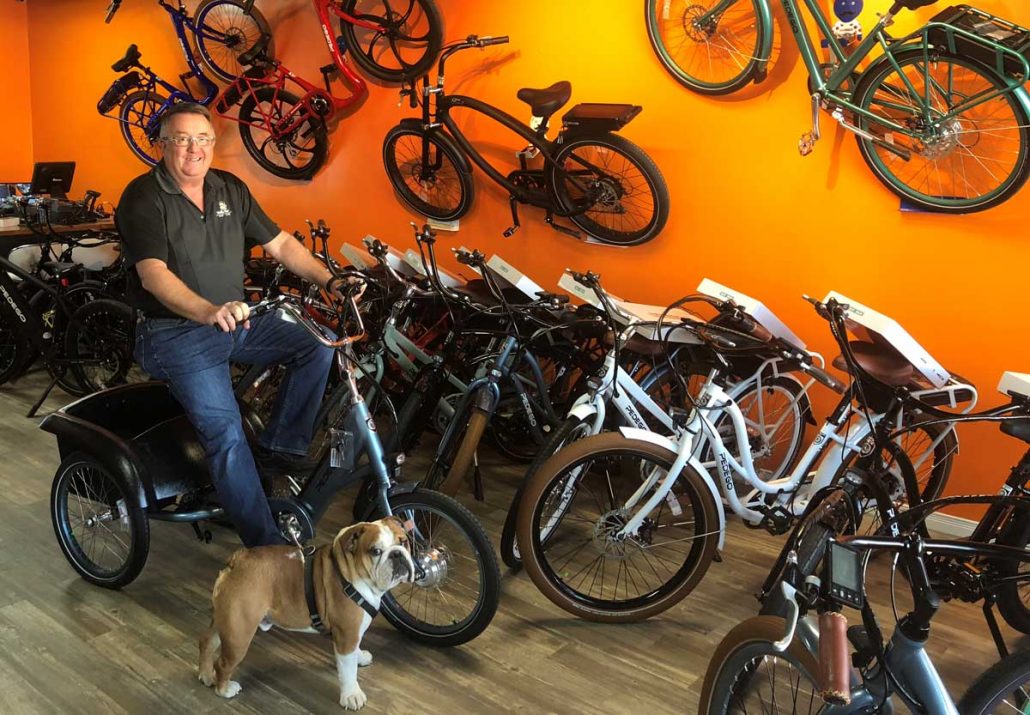 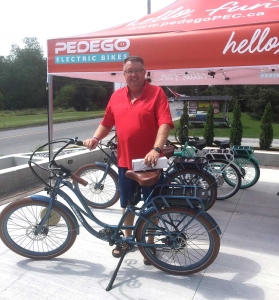 What was your first experience with a Pedego bike?

The first time I sat on a Pedego was at a pop-up store in Bloomfield, Ontario, run by Gill and Pat (now Pedego Prince Edward County). I went down to talk to them. As soon as you touch the pedals and the pedal assist kicks in, the wow factor is out of control! I bought a bike right there and then from them: a mineral blue step through Interceptor with brown tires.

Where are you located?

Our store is located at 47 William Street in downtown Bobcaygeon. It used to be a call centre of some sort, and we had to tear down lots of interior walls. My friend is a talented craftsman and he rebuilt the store. It is right next to Kim’s Hair Salon.

Last question. If Pedego Kawartha Lakes was an animal, what would it be? 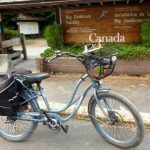