One of the most popular online magazines in the United States just wrote a feature about electric bikes and the author touched on something we all need to consider: electric bikes replace car journeys. Called “The Electric Glide — E-bikes are destined for something bigger than replacing regular bicycles” the article appears in February 12 issue of Slate and describes Henry Grabar’s experience riding an electric bike around Los Angeles.

Although infamous for its traffic-clogged freeways, L.A. is an excellent city to bike around the writer says because between the clogged arteries are “mile after square mile of low-density, low-stress residential bliss.” It was a warm and sunny day when he first got on the electric bike and his description of riding with the motor is typical of most people who try ebikes for the first time. “Reader, I flew, past even the MAMILs (middle-aged men in Lycra) out for their weekend rides. Their glares glanced off my back; other riders seemed perplexed at my speed. I get it. Watching someone ride one of these things is a little like seeing a cat leap 10 feet — it defies what your eyes have gotten used to believing is possible.”

“I thought of my e-bike more like a car than a bicycle. And maybe that is the way to think of them: not as high-class bicycles for riders who want to sweat less, but as low-cost, low-maintenance vehicles.”

The writer took two long rides throughout the city over the course of the week and came to realize that riding an electric bike, “feels as if you have superhuman strength, and that’s how people look at you, too (with a mixture of envy and anxiety.”

He then goes on to make the most important point of the article and one that we should all be thinking because electric bikes aren’t about replacing traditional bicycle journeys. Many hardcore bikers have the inaccurate notion that riders of electric bicycles are cheating because the motor is assisting in their pedalling. But what would they say if we told them that the other option was driving a car? Because that’s the case for many of us: we could burn fossil fuels driving to work or to the store or we could have fun riding an electric bike instead.

In the article, Grabar writes, “I thought of my e-bike more like a car than a bicycle. And maybe that is the way to think of them: not as high-class bicycles for riders who want to sweat less, but as low-cost, low-maintenance vehicles for people who drive three miles to work alone. Think of an e-bike as a replacement for a car, not a manually powered bike, and suddenly it seems cheap. It seems easy. It seems green. Parking is a piece of cake. And unlike a car, it never gets stuck in traffic.” 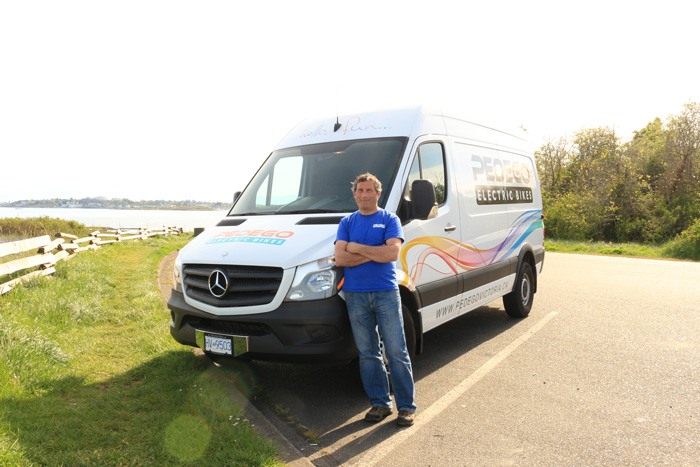 Pedego’s tagline is “Hello fun!” but soon the residents of Victoria, British Columbia will also be saying “Hello, convenience!” That’s because if you can’t bring your bike to a dealer location at 2039 Oak Bay Avenue for servicing or repair, they will come to you!

This type of old-fashioned customer service is almost unheard of these days. If fact, there are very few bicycle service companies throughout Canada that will come to your door and even fewer electric bike service companies. But that’s the beauty of Victoria Electric Bike’s mobile service: they only specialize in electric bicycles so you know you’re guaranteed to received fast, professional workmanship.

Victoria’s mobile service centre includes a fully stocked inventory of parts and equipment needed to work on electric bikes and they can travel anywhere within the city.

The service will include visits for annual tune-ups, warranty work, repairs, and even test rides and rentals! For example, if you’re interested in one or a few different selections of Pedego electric bikes but would rather take them for test rides within your own neighbourhood, they’ll gladly come to you. They’ll even bring a few extra so you and your friends can try them together. Likewise, if you and some friends want to rent electric bikes for the day, they can bring them to you for a pre-arranged drop-off fee.

It’s also important to remember that all Pedego electric bicycles and batteries come with a 2-year warranty.

You can now either visit the Victoria store and have a dedicated, experienced mechanic work on your ebike or they will come straight to you and offer the same, unparalleled service. Talk about peace of mind!

“We’re proud to recognize the recipients of the 2018 Top Pedego Dealer Awards for their achievements in going more than the extra mile to delight our customers with exceptional sales and customer service,” said Pedego Electric Bikes CEO and co-founder Don DiCostanzo.

Awards were selected in 12 categories that ranged from top-selling stores to recognition of quality stores. Designations for the types of Pedego dealers include single-store owners, operators (multiple-store owners) and distributors.