According to statistics, people who have one or more Pedegos in their homes lead happier lives, are considerably healthier, live longer and weigh less than those who don’t.

So the blogger above was referring to pets, not electric bikes, but hey, we think pet owners who also own Pedegos might be the happiest people on the planet. Does having a pet and an electric bike double your happiness? And what is the relationship between bikes and pets? Do they compete for affection from their owners, or is it more of a menage-a-trois?

We took a survey of the Pedego store owners in Canada to ask how their cats, dogs and horses feel about electric bikes. 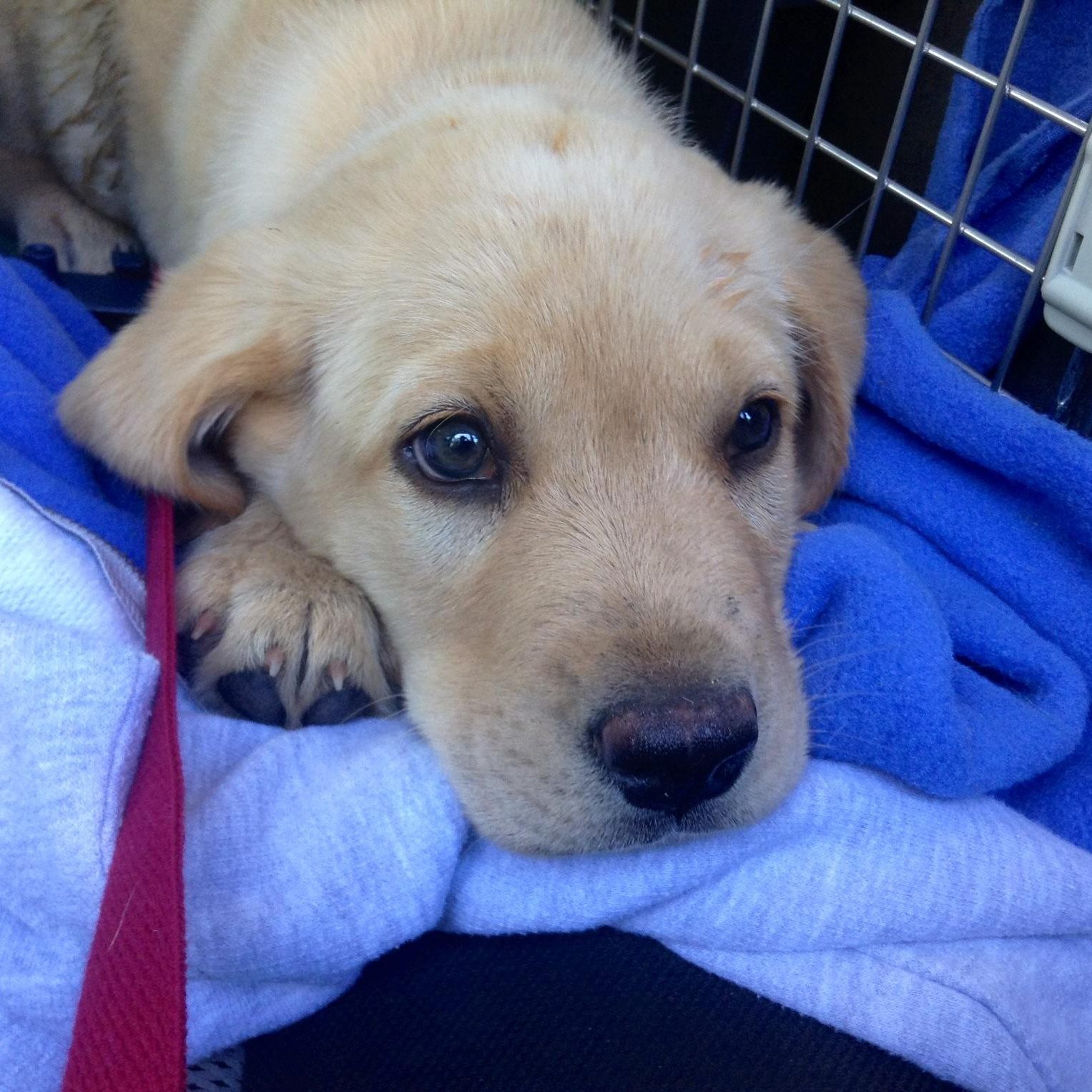 We got Percy in 2013 as a puppy. He’s got it pretty good thanks to our giant backyard, and he hardly ever comes into the store. The only reason he wants to come to Pedego Vancouver is because Kitsilano Beach is a few blocks from our store and that means sticks, swimming and sand. He’s not really into selling electric bikes. His main relationship with the electric bike is lying alongside it in the backyard and waiting for someone to get on it. I don’t think he misses us too much at the store. He has plenty of playdates at home, there’s room for a few neighbourhood dogs to come over.

Bentley is 2/1/2 years old and I have had him since he was 8 weeks old. He loves to socialize at the store and he is a great Pedego Kawartha Lakes mascot. It is funny that he likes bikes as much as I do. He loves sleeping in the Trike bucket, laying on the floor or pretending to guard the door. When he’s not at one of the Kawartha Lakes stores in Ontario, he likes to travel. He goes to Florida for the winters and even on holidays, he likes to visit the Pedego stores. He is living the dream. He makes us smile each day. 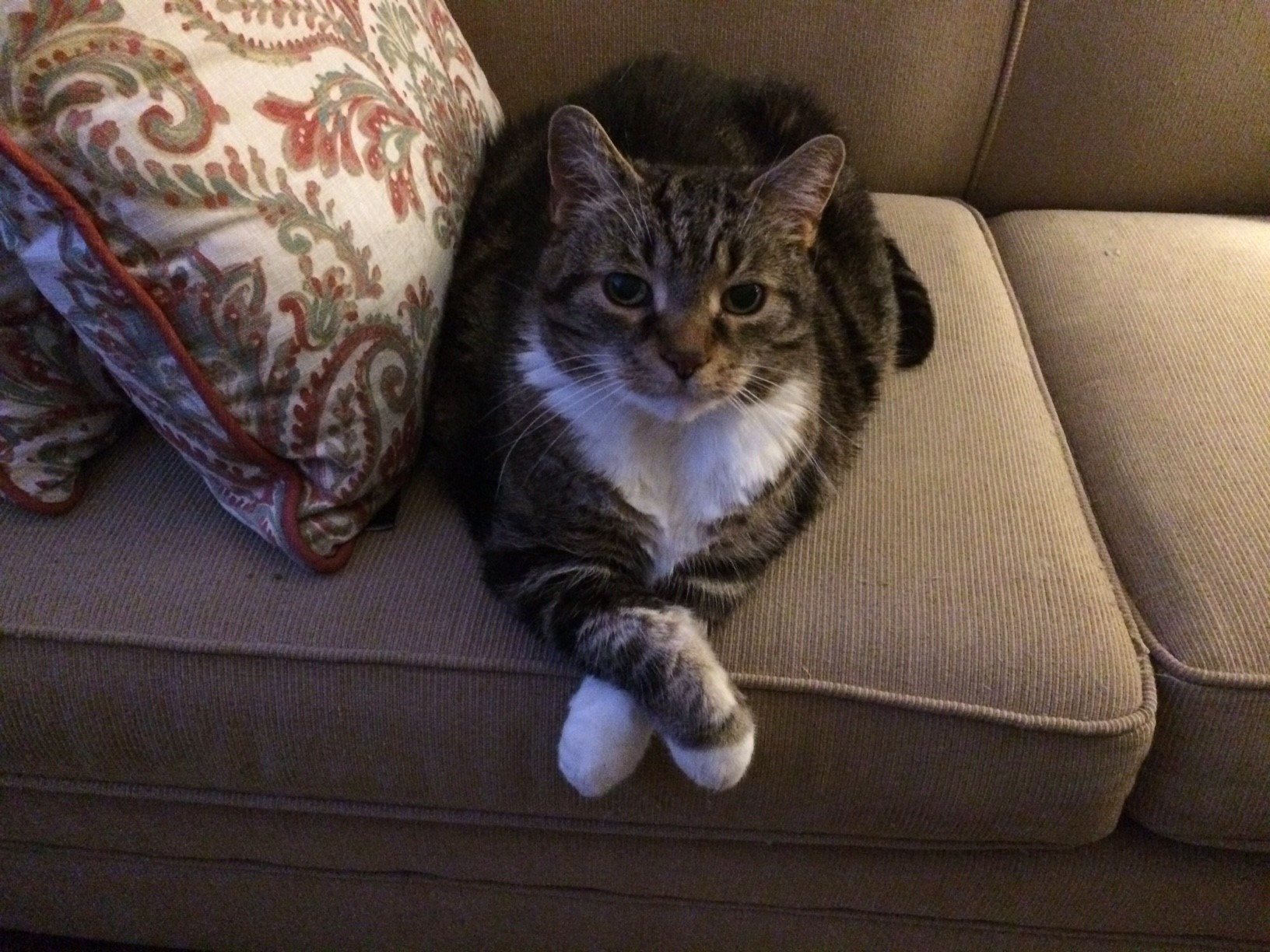 Bart is about 17 years old now. We got him from a shelter when we were alpaca farm owners in Niagara. Cats and alpacas get on really well, in fact they have similar temperaments. Alpacas will come to you when they feel like it, they are very curious and they can be quite chatty. Bart used to visit the alpacas every day and rub noses with them. They were always glad to see him. When we moved to Bloomfield and opened Pedego Prince Edward County, Bart lost interest in coming to work. He prefers to stay at home on the couch, though he never fails to ask: So, where do you plan on riding your Pedego today? 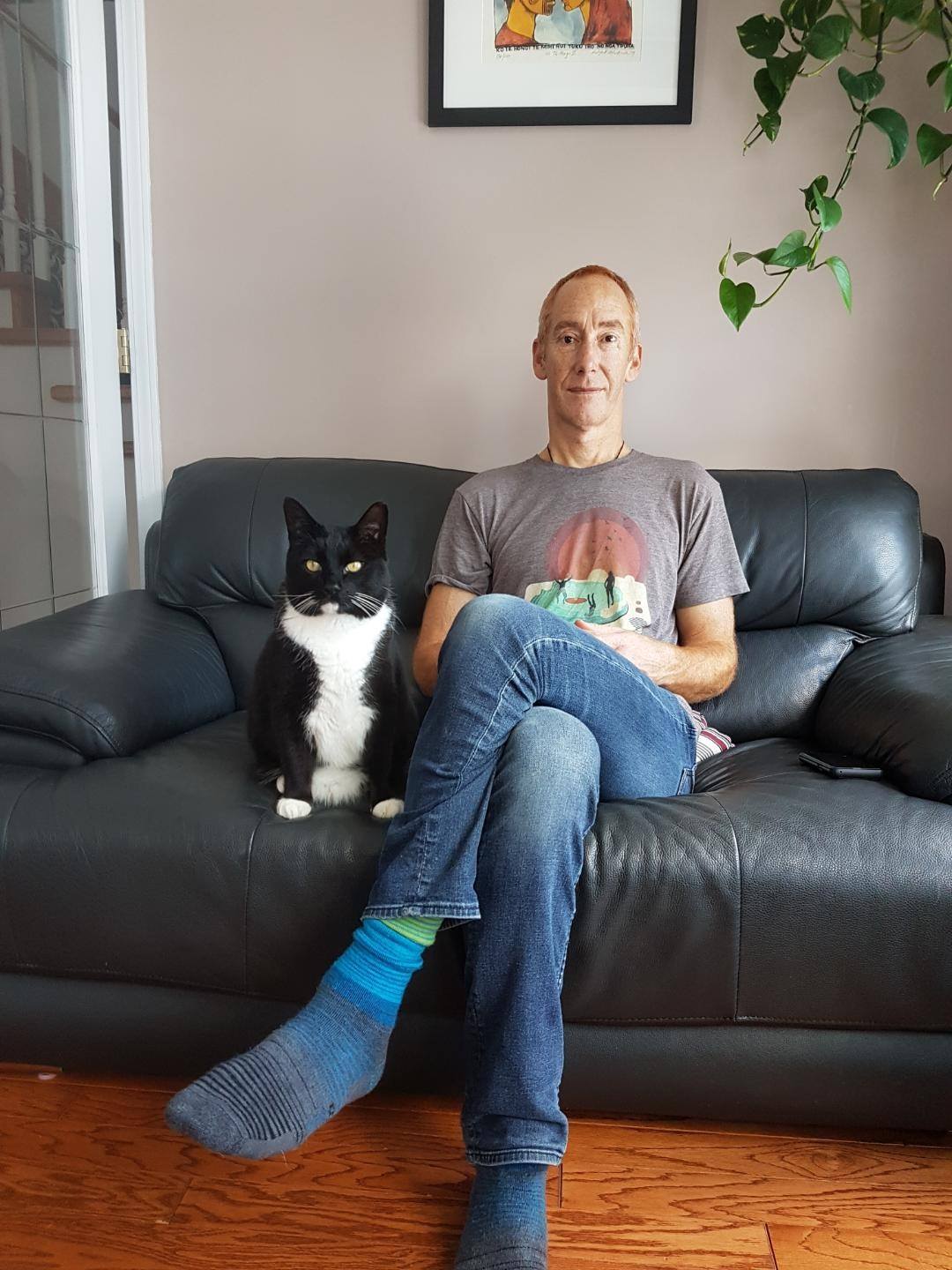 Levi is actually a bicolour American short hair cat with symmetrical gloves and boots. He’s also known as a Tuxedo or Jellico cat, apparently the most intelligent of the cat breeds. He’s smart enough to stay out of the way of the constant flow of electric bikes in and out of this place. His cat door enters directly into Pedego Canada’s headquarters, and office games he likes to play are hiding in empty spare parts boxes and getting shut in the postage room. He’s never got on an electric bike. He loves hunting and being outdoors, but riding bikes isn’t his cup of tea. 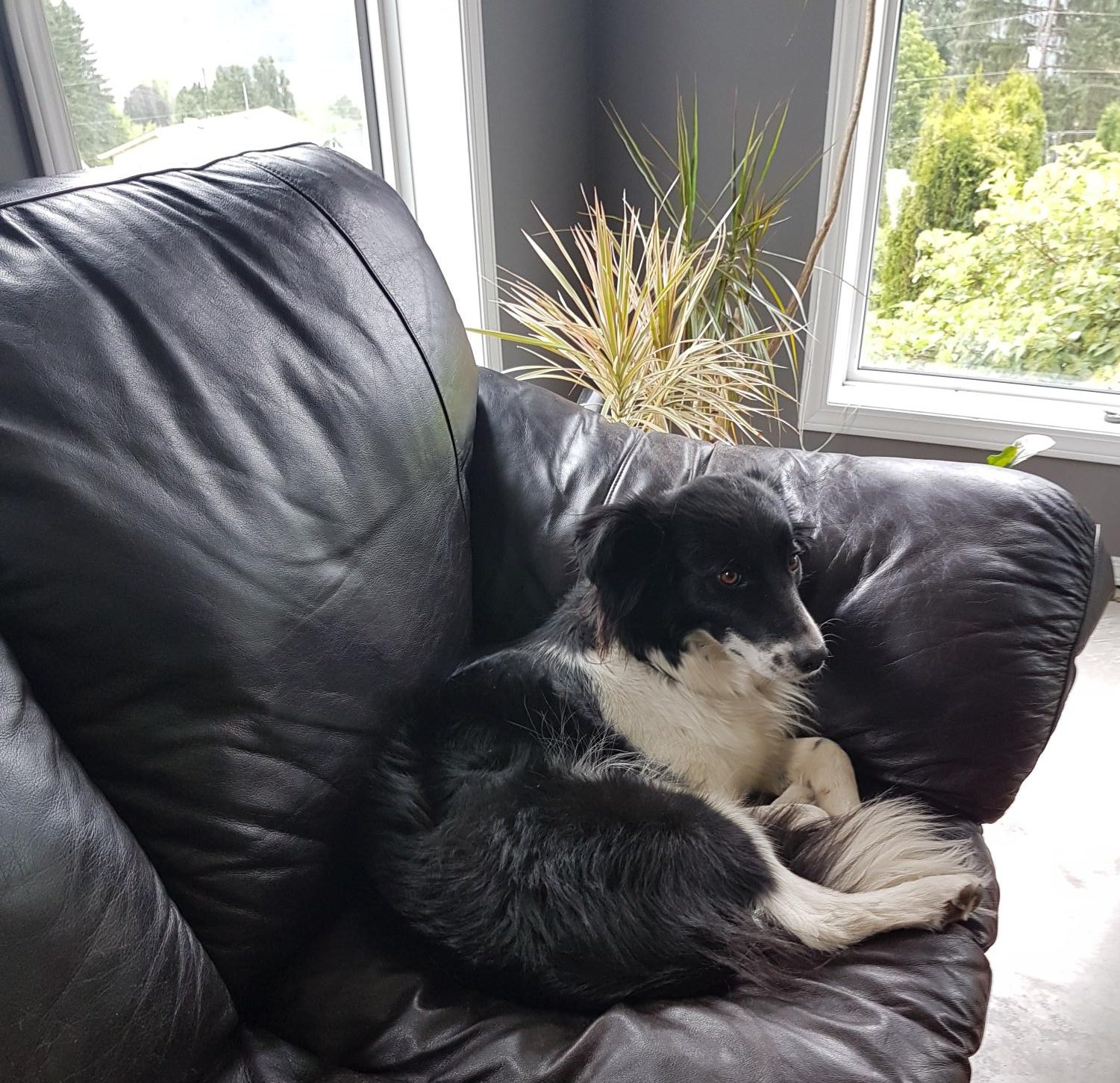 Gem comes to the Pedego Canada office every day and through doing this has developed a healthy respect for Levi. They match colours although not so much personalities, hence they don’t often play together. She sleeps on the couch with one eye open in case anyone is going out for a bike ride, either to go with them or wait for the coast to be clear so she can steal Levi’s kibble. I’ve tried to build a platform for her to ride on the back of the Pedego Stretch, but she is more interested in chasing electric bikes than riding on them. One of her favourite jobs is meeting fun lovers who come for free test rides, getting pats, and laying on the warm sidewalk waiting for them to return and give her more pats. 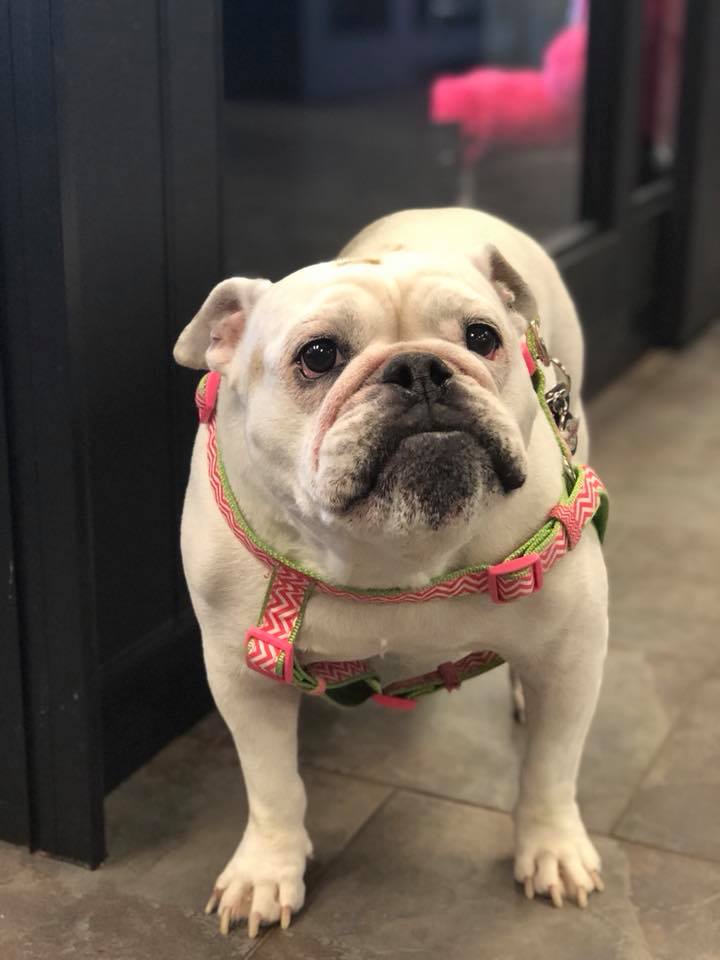 Chrome is a seasoned biker. She has been towed about the News Brunwick capital of Fredericton for some years now in a bike carrier. She weighs 60 pounds, and the trailer weighs another 20. Before I had a Pedego I often had to dismount and push the bike, the trailer, and Chrome up the hills. She’s actually the reason why I bought my first electric bike. Buying that bike led to me and Dawna opening the Pedego Fredericton. So we should credit Chrome with bringing Pedego Electric Bikes to Atlantic Canada. She rides to work with me each day to  Wheels and Deals “Canada’s Huggable Car & PowerSports Dealer. She’s well loved by our customers and likes to give licks as much as I like to give hugs. 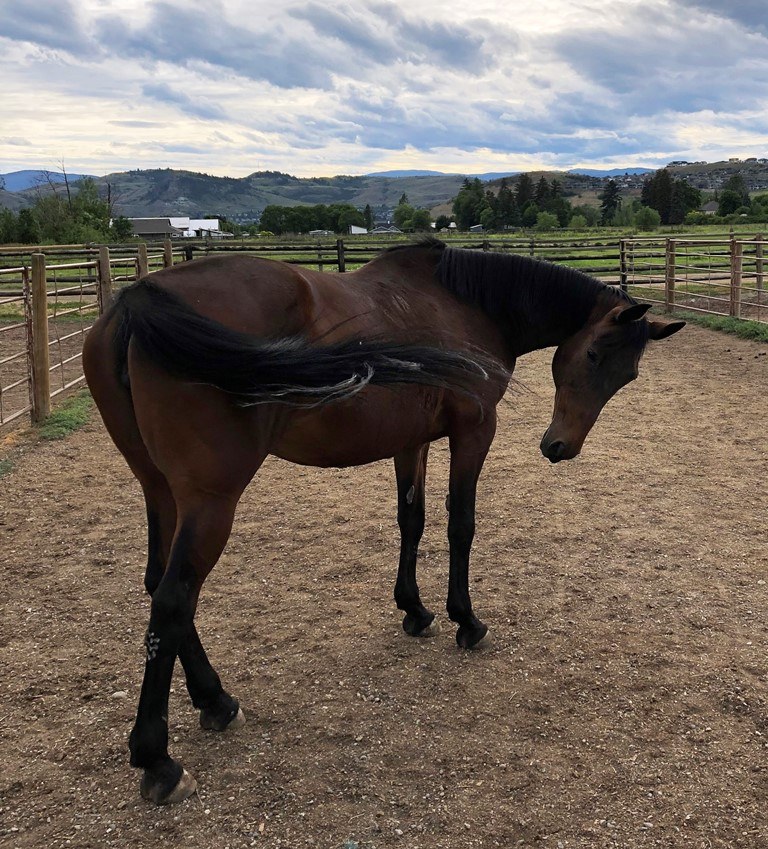 Curly Sue was born with ringlets in her mane and tail. She’s a 20 year old mare who my daughter and I bred for harness racing. It took the brood mare three attempts to become pregnant so her racing name became Three For Me. She had such a lovely temperament that after four years of racing she became our backyard horse, and now she only answers to Curly Sue. She moved to the Okanagan with us when we opened Pedego Oyama. About once a week I ride a Pedego Interceptor over the hill and down the valley to her boarding stable, take Curly Sue for a ride, then ride my electric bike home. She can’t come to our store at Gatzke’s Farm Market because horses aren’t allowed on the Okanagan Rail Trail. But there are enough trails in Coldstream Park to keep her happy.